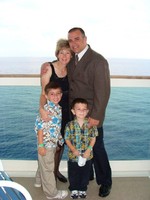 Joseph Gaspare LoNigro is a former Editor, Executive Producer and On-Air Personality for television stations in Los Angeles and Tampa. He currently lives in his hometown of Weeki Wachee, Florida with his wife and two sons.

Joe's novel The Treasure of the Seas and his short story The President's Token are currently available at Amazon.com and his latest Novella about a youth baseball team called I am Rightfield is scheduled to be released in early February.

The Treasure of the Seas

Joseph Gaspare LoNigro's new book The Treasure of The Seas is available now in paperback and on Kindle by clicking the following link to Amazon:

I Am Rightfield is now available in paperback by going to the following link.

I always love to hear from my readers. Please don't hesitate to contact me at joelonbooks@gmail.com.

Find out more about my upcoming book releases and when I might be stopping by a town near you on my Facebook page.